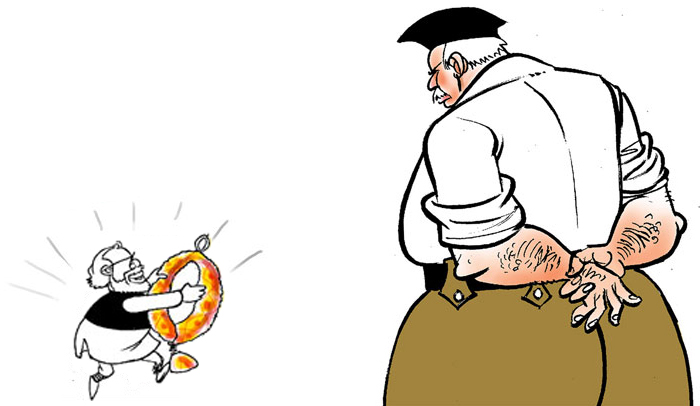 Strange arguments have been offered in defence of Doordarshan’s controversial decision to air the Vijaya Dashmi speech of Sangh Pramukh, Mohanrao Bhagwat. One of them invoked DD’s live telecast of the Pope’s message. Now, to be likened as the Hindu counterpart of the Pope, Mohan Rao Bhagwat will have to make some effort.

Not only will he have to bring the RSS out of its see through closet, he will also require no objection certificates from our Shankaracharyas, Mutts and Akharas for his own rechristening as the supreme leader of the Hindus.

On the face of it, the founder’s day speech is a repetition of oft repeated platitudes. But there are always coded messages for the cadre and sympathizers. The 1992 speech of then Sar Sanghachalak set the ball rolling for events that led to the demolition of the Babri Masjid.

Sudarshan, in one of his founder’s day speeches gave a clear message of Swadeshikaran of churches and nationalization of Muslims. Last year’s speech sent a clear message to help BJP in the elections. I have unsuccessfully tried to find the Vijaya Dashami speech of the Sangh Pramukh in the year 1947, a few months ahead of Gandhi's assassination by a man affiliated to the RSS.

The unequivocal alliance with the BJP and with the Prime Minister was this year’s take away from Mohan Rao Bhagwat’s speech.

RSS however is not what it says. RSS is what it thinks and does. And more importantly, what people think it does.

What deserves to be questioned is the unabashed patronage offered by the government to an organisation which certainly cannot be called above board in its activities pre and post independence.

Platitudes notwithstanding, issues raised by the Sangh Pramukh are issues that require widespread consensus building. Why was he given a platform to attempt to influence? Will the counter narrative be given the same space too? The state should provide a level playing field to all streams of thought and not just be reduced to a mouthpiece of the so-called vanguards of Hindu identity.

How many Hindus will consider Mohan Rao Bhagwat as their leader? Of the 65% young Indians, how many would subscribe to Bhagwat’s regressive views on education (blaming it for family break ups)

his interventionism on dietary habits or his dream of an Akhand Bharat (which by the way will have more than 45% Muslims in it)? All these views of Mohan Rao Bhagwat have frequently been aired, albeit not on Doordarshan.

Pratap Bhanu Mehta has brilliantly used a phrase coined by Theodore Roosevelt called ‘Bully Pulpit’. The Prime Minister by virtue of his position occupies and knows how to use the Bully Pulpit. Were the 31% voters who elected Narendra Modi told that they will be subject to another Bully Pulpit? One cannot over emphasise the fact that this government is all about marketing skills, yet why should the nation vote for one bully pulpit and get another free?

By getting Doordarshan to broadcast Mohan Rao Bhagwat’s speech, was Narendra Modi, the Pracharak giving his Guru Dakshina to the Sar Sanghachalak?