Right from day one America was in the lead. John Kerry, the US secretary of state set the US Corporate lobby dictated agenda with 5 broader issues — with liability issue in civil nuclear deal to limit US corporate liability to a certain cap on the top followed by defense, trade, renewable energy and climate change.

The US is the clear winner when Modi lead BJP government signed the nuclear deal by removing the unlimited liability clause under pressure from Obama. It was the BJP that brought/joined the No Confidence Motion against Dr.Manmohan Singh's Government on the issue of liability clause and then the infamous cash for vote scam happened in the Parliament. However, as usual BJP under Modi took U - turn on that & decided to create a pool of insurance by the state owned Insurance Companies to be used to pay the compensation and limit the product liability to 5 years. The 50% of Insurance amount will be born by the Government of India & the remaining 50% by the 4 public sector units for both foreign and domestic nuclear corporations. In other words all the liability will be born by the Government of India aka Citizens of India.

Yes the Modi Government have got a breakthrough in avoiding US inspection in the Indian reactors, but that was the issue of second stage & the liability clause couldn't allow UPA Government to reach there. As the suppliers’ liability is already very meager, PM Modi has further diluted the suppliers’ liability clause, to give an escape route to nuclear corporations in case of a nuclear disaster. The hesitation on the part of US Corporations to take the liability in case of a disaster shows that they do not trust the designs of their own reactors. The fact is Fukushima reactors in Japan were supplied by US Corporations and Modi government has put the life of its own citizens under a big risk in case of a nuclear disaster.

As far as defense technology transfer and co-production in India is concerned all the talks will be the matter for discussion for future historians. It is an open secret that US on this count is very protective and when it does not share technology with its close NATO allies why they will share it with India? The only country that have unlimited access to defense technology and hardware is Israel that too because it practically owns by virtue of financing campaigns of all the politicians across the aisles in Washington and state houses and Senates of America.

By signing (if India has signed) the Communications Interoperability and Security Memorandum of Understanding (CISMOA) India will be allowing access to USA to its entire communication system. USA has a long history of spying on their friends and allies except Israel . The reason is Israel/MOSSAD is better equipped to spy on America ; materially and has vast support of prominent Americans in high places as its friends.

Indians feel proud with the presence of US junk/heath hazard industry like McDonald, Starbucks, Coke, Pepsi, Pizza Hut, Burger King, Kentucky Fried Chicken, Cargill, Monsanto etc in India for killing the local food and beverage industry, creating low paid jobs and draining foreign exchange with their massive outflow in royalties. Indians also consider it progress with Ford, GM, Honda, Hundai, Toyota, Mercedes, Audi etc assembling cars in India without critical components technology transfer and are responsible for massive out flow of foreign exchange in royalties. PM Modi as CM of Gujarat gave Ford USA Rs 18,000.00 crores to create 2,000 jobs with no clause that they have to transfer critical component technology! No one in India wants to talk about China where Honda and Audi are using 100% local contents. No one wants to criticize Suzuki established in 1984 and still the use of local components have not crossed 50% and still the critical component technology has not been transferred. 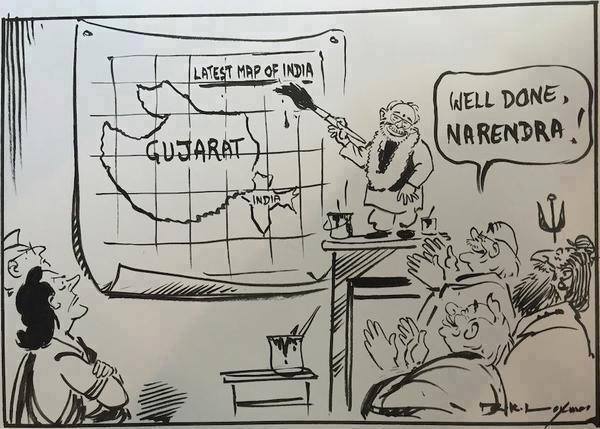 Three cheers for lame duck President Obama with lowest domestic approval rating that was not in a position to deliver anything of consequence to India for achieving a big win in India for US corporations. With struggling US economy with 50 mil people on food stamps and high unemployment; US corporations need new markets. What could be a better place to sell their junk industry and have control on food supply and communication than India with 350 million middle class that out numbered 310 million total US population. It may improve Obama's domestic rating and if it goes above 50% it may pave the way for a 3rd Democrat Term in the White House.

On the other hand PM Modi was more busy in projecting himself as the Fashion Icon of the world by wearing a suite with his name "Narendra Damodardas Modi" written in English all over it like the suits of world famous dictator Hosni Mubarak of Egypt with his name written on them. That made Modi a laughing stock in the international media and Washington Post tweeted that "Prime Minister Modi wore a suit that takes personalization to a "ridiculus extreme". According to Reuters Obama also dig in by saying "Move aside, Michelle Obama. The World has a new fashion icon....". May be PM Modi was promoting English against the teachings of his mentors RSS that wants to promote Hindi in India and abroad. Just few months back it was the same PM Modi who insisted on speaking in Hindi at UN. Even that was not enough PM Modi made another statement to the world by wearing a headgear that he is the PM of Gujarat/Gujaratis only not every Indian on the Republic Day of India. PM Modi forgot that the headgear he is wearing is not an article of faith like in Sikhism. Then he is not attending a local function in Gujarat but Republic Day Parade of India that represents 29 states of India and their residents from all faiths and no faith.