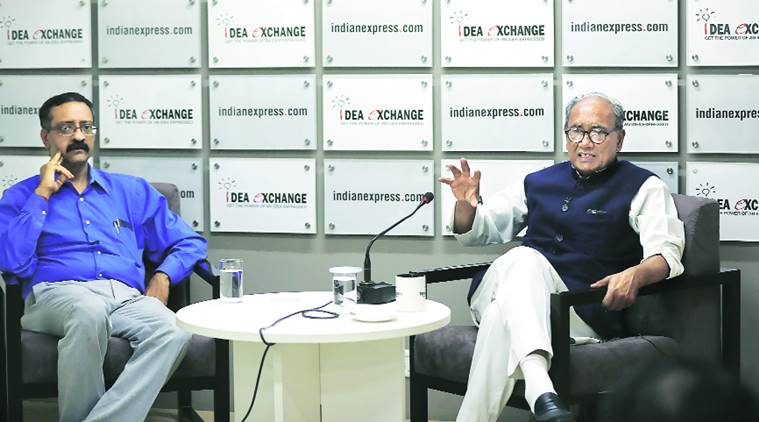 ongress leader and the party’s in-charge for Goa polls, Digvijaya Singh, reflects on why they failed to form a government in the state, says the party in power at the Centre forms the government in Goa, calls for strengthening the regional leadership and insists that only Rahul Gandhi can help build a new Congress

Maneesh Chhibber: What do you think went wrong in Goa?

Digvijay Singh:Nothing. Let me give you a blow-by-blow account. I was made in-charge of Goa sometime in late 2013. The party was in a disarray. As far as this election goes, I as general secretary had strategised that we should have an anti-communal front. There were these two people, Babush Monserrate and Vijai Sardesai… Babush was a sitting Congress MLA, but he had walked out. Sardesai was also in the Congress earlier, he wanted to contest the 2012 election, but was denied a ticket.

I touched base with him (Sardesai). I was in constant touch with Babush also, and as a strategy they said let us have a secular front, with the Congress in the lead. So, Babush, Sardesai and the NCP, were invited to discuss a pre-poll alliance. We went for the elections, we ran a very low key campaign and attacked AAP more than the BJP, because they were encroaching on our votes.

We were successful in reducing the AAP to zero. Their CM candidate lost, he got only 1,400 votes, and the party was decimated. BJP came down from 24 to 13. We got 17 plus one, 18 seats. Churchill Alemao of the NCP won. I was there since the evening of March 10. We wanted to have a CLP meeting on March 11 itself at 6pm. But I don’t know what they did with the counting. It is such a small state with each constituency having no more than 25-30,000 votes. Counting only finished at 7.30 in the evening. After that there were rallies etc and the Congress MLAs could not reach the PCC office even till 9.30 pm. They called me and said we are very tired, let’s meet tomorrow. I said, fine, let’s meet tomorrow.

Then, we went to meet Sardesai late in the night, sometime around 12.30 am. He was angry that my party had put up a candidate against him. But we convinced him and promised to meet all his demands. He said that my primary demand is that ‘X’ should not be the chief minister. We agreed.

We returned from his place around 1.30 am, without realising that things will change again. Next day I found out that Brij Bhushan Singh, the MP from Gonda, who is the All India Wrestling Federation president, had accompanied Nitin Gadkari to Goa. Now, Vijai Sardesai is the state level wrestling federation president of Goa. So, Brij Bhushan Singh walked in after we left, and the wrestling started. He took Sardesai to Gadkari, and they were together between 4 am and 7 am.

I came to know much later that this was done. I trusted him. Around 10 am the next day I started calling Rohan Khaunte and Vijai Sardesai, but there was no contact. I called his PA, security, no reaction.

We called our CLP meeting at 11 and by 3.30-4 PM the exercise was over. Sardesai wanted Digambar Kamat to be the CM, so we decided to elect him. We called Digambar Kamat and told him that please make us talk to Sardesai so that we can tell him that you are our leader. He kept on calling, again no response.

Suddenly there was a phone call, and they said, ‘Sir sorry, they are going to the Governor’.

See, my basic objection is that in Parliamentary democracy of course numbers count, but it has to be on the basis of the mandate received. Any political party if it gets the majority, they are invited to form the government. In case of a fractured mandate, the single largest party has the largest mandate. This was not followed in Goa. The Governor should have waited. By doing this she has contravened constitutional provisions.

See, the letter to the Governor only goes once the leader is elected . When we called the Governor’s office we were told there is no one here today because it is a Sunday, so you leave the letter at the gate.

We have also now moved a substantive motion against the Governor, which will be discussed on Monday, asking for a recall.

P Vaidyanathan Iyer: Do you feel completely outsmarted by the BJP, given the pace with which they moved in Goa?

Digvijay Singh:The new government is fragile and I don’t think it will last.

Vandita Mishra: You pointed out the history of Goa, and said that in times of a fractured mandate in the state, the party that is in power at the Centre forms the government in the state. So what you are saying, in other words, is that the Congress has been as responsible for flouting the constitutional principles in government formation in Goa, as the BJP is being accused of now.

Anand Mishra: As a senior leader of the Congress, what, in your opinion, is ailing the party?

Digvijay Singh:Nothing. The issue is that Congress is not a cadre-based party. We have not been able to build up enough regional leadership, which is necessary in today’s times. Leaders such as Indira Gandhi and Rajiv Gandhi had a larger than life presence, because of which we could ignore the regional leadership. Post the Narasimha Rao period, regional leaders have emerged, even in the BJP. Now the Congress party has to basically look into building regional leaders more aggressively.

Anand Mishra: But there are several states, such as Maharashtra and Haryana, where the BJP has won the elections without a state face. Don’t you think the problem is at the national level?

Digvijay Singh:Anand Mishra: But there are several states, such as Maharashtra and Haryana, where the BJP has won the elections without a state face. Don’t you think the problem is at the national level?

We have beaten the BJP in Manipur and Goa, but no one gives him credit for it. At the same time, there should be a fresh move to rejuvenate the Congress.

Coomi Kapoor: In UP, do you think it was a mistake to go along with the SP?

Liz Mathew: Who do you hold responsible for the lack of a regional leadership in the Congress?

Digvijay Singh:Every Congress leader is responsible, but at the same time there are certain basic issues on which we need to work on, such as bringing up a new leadership. There is no dearth of new leaders in the Congress, it is just a question of giving them opportunity. In 2005 I told Sonia Gandhi that we have to bring out a new Congress. A committee headed by Veerappa Moily was formed. Unfortunately, we could not act on the ideas we discussed then.

The demographic profile of this country is changing. We cannot attract Dalits, tribals, anymore by giving them rice for Rs 1/kg, and wheat. Their aspirations have changed. Dalits and the tribals have moved into a middle class society and they are different from the Scheduled Castes of the ’70s and ’60s. We need to take that into account and formulate strategies according to that.

Krishn Kaushik: The Congress has lost some important leaders in the recent past who say the high command was not willing to listen to them — Himanta Biswa Sarma in Assam, N Biren Singh in Manipur.

Digvijay Singh:Himanta Biswa Sarma is an amazing fellow. I have been in-charge of Assam for seven years. He is a political animal par excellence. He is also a great operator and manipulator. We shouldn’t have lost him. As far as our friend, the new CM of Manipur is concerned, he was the Himanta Biswa Sarma of Okram Ibobi. So, they must have fallen apart.

Krishn Kaushik: These leaders claim that the Congress party rewards loyalty to the family over talent.

Digvijay Singh:I don’t agree with that. This is a family which has political instinct, a political heritage and acceptability among the Congressmen. This family binds the Congress together. That is their strength.

Liz Mathew: The BJP and Narendra Modi have managed to successfully project the Gujarat model in their campaigns in other states. When it comes to the Congress, is there any state that can be projected as a governance or development model?

Digvijay Singh:I admire the marketing skills of Narendra Modi. Gujarat has always been a developed state, it is not because of Modi. Also, the Gujarat development model is totally centralised, whereas the Congress believes in decentralised functioning of the government.

Karnataka has empowered its elected representatives, and the state government has done exceedingly well on all fronts, but it has failed to market itself. I am in-charge of Karnataka, I have been telling Siddaramaiahji, if Narendra Modi, without anything, can market himself on the national, international scene, why can’t you market Karnataka.

Digvijay Singh:That’s a family affair, I don’t want to get involved in it. Let them decide. But I can tell you one thing, Congressmen throughout the country will be very happy if Priyanka Gandhi joined active politics.

P Vaidyanathan Iyer: One thing that the Congress appears to be failing at is providing a counter-narrative to the politics of the BJP.

Digvijay Singh:Yes, that sums up the weakness of the Congress party. A clear distinction between the ideology of the BJP and Congress has to be made and conveyed aggressively to the public. I have been saying this for a long time. Sometimes, I feel, the Congress party holds itself back when there is need for a punch. BJP’s ideology is that of hate and violence. Congress is a party of love, compassion and non-violence. We are Gandhians, Nehruvians.

We cannot have some form of soft Hindutva, there is no such thing. Mahatma Gandhi understood India. India is not a communal country, it has a secular mindset. We have absorbed Islam. Sufism came here. We have absorbed Christianity.

The problem with Islam now is that the Wahhabis are getting more acceptance in the Muslim world. Wahhabism and the RSS are basically two sides of the same coin. We have to drill into the minds of people that this country will not take religious fundamentalism of any kind, Hindu or Muslim. Jawaharlal Nehru had rightly said that majority communalism is more dangerous than minority communalism.

This is the country of Gautam Budh, Bhagwan Mahavir, Mahatma Gandhi, love, compassion, non-violence. Our country cannot see this violence. War is always the last option. Here we have people shouting about why we should go to war with Pakistan. Is it good for the country? Who suffers in a war? The entire nation suffers. Narendra Modi is a warmonger. He will take this country into a limited war before the 2019 elections. Mark my words.

The Congress party has to aggressively take up Gandhian-Nehruvian socialism against the religious fundamentalism of the Sangh.

Sanchari Bhattacharya: Why has there been no action on the observations of the AK Antony Committee report?

Digvijay Singh:I would say that we want a new Congress, a new charter, a new road map, a new style of campaigning… A new Congress has to be built and there is no other person who can do it better than Rahul Gandhi. He has to act. My complaint against Rahul Gandhi is that he is not acting decisively. I have told him this a number of times. Sometimes he gets angry when I keep repeating the same thing.