During the anti colonial movement, Mahatma Gandhi emerged as the tallest of leaders and was called, ‘Father of the nation’ Rashtrapita. This term was first used by Subhash Chandra Bose in a Radio address in 1944 and later approved, accepted and upheld by majority of Indians. Of course he was not accepted as Father of the Nation by Muslim and Hindu communalists.

For Muslim communalists, Muslim Nation began from eight century with the rule of Mohammad bin Kasim in Sindh. For Hindu Communalists this has been a Hindu nation form times immemorial. Gandhi was accepted as Father of the nation by majority of Indians and all those who were with freedom movement led by him for his role in bringing together all the people of India. The nation was seen as ‘Nation in the making’ not as a readymade nation as presented by religious nationalists. Gandhi’s marathon effort was to bring in fraternity amongst all the Indians and so Hindu-Muslim unity was central to his enterprise. This was the logical central point of his effort as these were two main religious communities. He anchored himself to morality of all the religions and could bring the bonding of different religious communities under the overarching identity of ‘Indian’. He faced the strong resistance to his efforts from the propaganda and deeds of the communal forces, that’s also what led to his murder in 1948.

Despite his murder; the communalists and their Hate propaganda and divisive thinking continued and kept changing its language in different guises. While majority Muslim communalists went over to Pakistan, the leftover of this communalism did produce the likes of Akbaruddudin Owaisi and his clones indulging in Hate speech against Hindus. On a much larger and bigger scale the head of Hindu communal organization, kept harping on creating social common sense picked from the British introduced communal historiography, where Muslim kings were demonized, labeled as aliens etc. around which stereotypes and myths were constructed. This demonization reached its peak in the slogan Babar ki Aulad jao Kabristan ya Pakistan (sons of Babar go to Pakistan or graveyard) The latest in the line is that all those who do not identify with Lord Ram are Haramjade (Illegitimates) and the country belongs to Ramjade’s (Sons of Ram) only, others are to be treated like aliens.

This formulation is the culmination of RSS Chief Mohan Bhagwat’s recent statement that all of us are Hindus, this is Hindustan. By inference Lord Ram is the symbol of India that is Hindustan and so Sadhvi Niranjan Jyoti the BJP minister in central cabinet stated “Modi has given a mantra that we will neither take bribe nor let others take bribe. Now you have to decide whom to choose. Will you choose the sons of Ram or those who are illegitimate)," Just a small recap; Indian Constitution calls it as “India that is Bharat’. 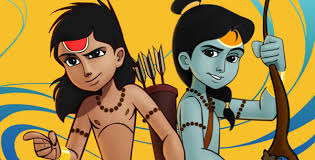 Now while the collective opposition is demanding the suspension of the Sadhvi from Minister ship and initiating the legal proceedings against her, the BJP is hiding her under the pretext that she has already apologized and that she is new to the ministry. Also that she is coming from a poor dalit background. The opposition argument is that she has taken oath under the Indian Constitution, while her statement is not only an attempt to create a divide between religious communities, it’s a blatant hate speech and such a person is already guilty of violating the Indian Constitution. The criminal action demanded by opposition ranks against the minister Sadhvi Niranjan Jyoti relates to the hate speech provision, Section 153A of the Indian Penal Code, which prescribes a maximum sentence of three years of imprisonment.

One can be charged under this section only with the government's sanction. Hate speech is widely understood to be an exception to the freedom of speech, Section 153A also holds to account anybody who is "promoting enmity between different groups on grounds of religion ... and doing acts prejudicial to maintenance of harmony". There are many in this gallery, prominent amongst them being Akbaruddin Owaisi, Raj Thackeray, Praveen Togadia, and Varun Gandhi, to name the few who came out with scathing statements against the ‘other community’. Hiding behind the fact that Sadhiv Jyoti is a dalit holds no water as she is fully indoctrinated in the ideology of Sangh Parivar. Also the argument that even Sonia Gandhi used the word ‘Maut ke Saudagar’ (Merchants of Death) is not relevant here, as Sonia was talking about a political tendency of communalism, not against any particular religious community.

Overtly BJP leadership is not much supporting this statement, but this is the logical outcome of the politics of their Parivar, which brought them to power and whose agenda of Hindu nationalism they are pursuing. How do we deal with such divisive agenda and Hate speech? One recalls Akbaruddin Owaisi was taken to task for his Hate speech. If one recalls right Dr. Pravin Togadia was also the guest of the prison for Hate speech once. Dr. Togadia has probably set the bench marks more than once in clever use of divisive language. His video of how to get rid of Muslim neighbors by throwing tomatoes on them was also seen but most of the time he has escaped the punishment. A similar comment, like the one now of Sadhvi Jyoti was also made by another BJP leader in Uttar Pradesh by Ram Pratap Chauhan in Vijay Shankhnaad Rally in Agra on 21st November 2013 as well. That one got unnoticed. IT only goes on to show, Sadhvi’s statement is a part of the thinking in the wider Parivar circle.

BJP leadership faces the dilemma. In Parliament and for the global consumption it has to keep the face of ‘Development’, while to keep its political power it has to go with the divisive agenda of its parent organization as unfolded by its associates and many elements within the party. So a clever balancing act is always in order, to hide under the apology of A Sadhvi and to turn a blind eye towards such tendencies. For them the same divisive agenda has to be operationalized with some variations in places where elections are to be held.

Then the question comes, as Indian nation who is our Father; Gandhi or Ram? Ram is a mythological reality with whom large section of Hindus identify. He was King of Ayodhya. The criticism of the prevalent version of Ram Story by Dr. Ambedkar seems to have been ignored in the din of communal hysteria. In ‘Riddles of Hinduism’, Ambedkar takes up the issue of Ram upholding caste and gender hierarchy amongst others. Rams’ murder of Shambuk, as Shambuk was a Shudra who was doing penance has come under heavy criticism from Ambedkar. Similarly banishing his pregnant wife Sita is a serious issue. One more point Ambedkar raises is also about Ram’s killing of Bali Raja, that too from behind. Bali was a popular king revered by dalit bahujans. Similarly Periyar Ramasami Naicker also took many of these issues about the Lord.

While there are claims that we are a Hindu nation from times immemorial, as a matter of fact India became a nation state through the anti colonial struggle led by Gandhi. So the very formulation that all Indians are sons of Ram has no grounding. Surely many Hindus identify with Ram but as Indians, it is Gandhi who is the ‘father of the nation’. Ram is symbol of Hindu nationalism while Gandhi is symbol of Indian nationalism.

After Modi came to power in 2014, the assertion of RSS agenda is going on uninhibited and intimidating those who uphold the Indian Constitution and values of freedom struggle. Assertions like Ramjade as synonymous with Indian-ness are revival of the forces which killed and went on to celebrate this dastardly act, which was the first attack on values of our freedom movement.